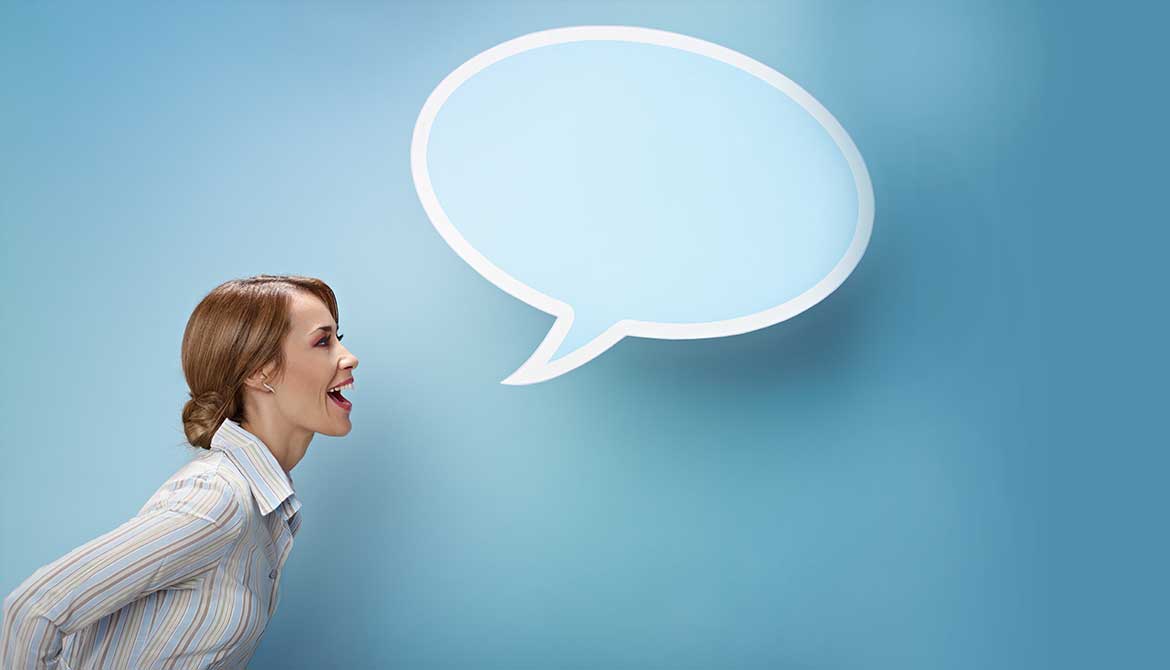 With Awareness and Resolve, Women Can Amplify Their Voice, Not Diminish It.

What you say is important, but how you say it—and how you present yourself when speaking—can mean the difference between someone who is listened to or someone whose input is dismissed. For women who want career advancement, this is especially critical, since far too often women’s authority and expertise is questioned. This is a predicament made worse by speaking styles, vocal inflections and behaviors more commonly associated with females—habits that don’t always reflect a woman’s true power or capability. Combined with a reluctance to speak up with assertion—also not uncommon among women in the workplace, the result can be a lack of recognition and a career trajectory that doesn’t rise as high as deserved.

The issue of womanspeak is a complicated one, and is frequently debated, says Veronica Rueckert, who works with women on improving vocal technique, public speaking skills and content shaping, among other areas.

“To our ears, the voice of authority is the voice of a man,” explains Rueckert. “When a woman uses uptalk, vocal fry or over-apologizing, she may sound insecure to her audience. If women were the ones in charge in our citadels of power, men might be trying to sound more like women. But that’s not the world we live in … yet.”

The fact remains that there is still very much a double standard for women, says Diane DiResta, a communications expert and executive coach.

“Sometimes it’s due to an unconscious bias,” she says. “[Consequently], women need to hold themselves to a higher standard. They can lose credibility, be overlooked for leadership positions or high visibility projects. Their ideas can be lost if they don’t speak up."

Getting a handle on the vocal habits and speaking behaviors to avoid first requires identifying what they are, particularly since for so many of us, they feel completely natural.

According to DiResta and Rueckert, some behaviors that tend to be specific to women include:

Other vocal and behavioral habits not necessarily specific to women are also worth eliminating, or at least controlling. Take fillers, for example. These are words like as “ah,” “um,” “and so” and “you know” that constitute verbal clutter, explains Lark Doley, past president of Toastmasters International.

Filler words are used to fill gaps or pauses in sentences while the speaker collects his or her thoughts. They are common and they are annoying. (Once you become aware of such filler words, you’ll see how ubiquitous they are.) Fillers don’t add meaning. Instead, they indicate hesitation, uncertainty, nervousness or a lack of preparation.

Breaking your reliance on fillers is often difficult, requiring mindfulness, preparation and practice, says Doley, but making efforts to do so is essential since fillers can undermine a woman’s efforts to project strength, confidence and self-esteem, she explains.

Doley invites women to embrace “the power of the pause”—something Toastmasters emphasizes, explaining that pauses make both the speaker and those listening stop and think. What else does this Distinguished Toastmaster advise?

“Adopt a good stance and posture. Use a pitch people are willing to hear and listen to. Use good volume and speak in a lower register while avoiding vocal fry. And pace yourself. The pace needs to be appropriate for the audience,” Doley says, recalling when she was presenting in China and was cautioned to speak at a slower pace so the audience could better understand and connect to what she was saying.

Rueckert also believes in pauses, explaining that they (along with inflecting the voice downward) make speakers appear more in command.

“In one study of male leaders, the longer the speaker paused while speaking, the more authority he was perceived to have,” she says. “Just as silences are a part of music while an orchestra plays, pauses are a part of your speech.

“Women especially tend to feel pressured to rush through their material instead of owning their space and their speaking time,” Rueckert continues. “Learning to be comfortable in the silences of your speech can help you fully inhabit the material.”

Don’t overlook body language, says DiResta. Make direct eye contact, use a firm handshake and keep your posture erect and confident. Above all, avoid tying yourself in a physical knot.

“I hear from too many women that they’re afraid of looking busy or frantic when they talk with their hands,” Rueckert says. “So they sit with their legs and arms crossed—what I call the lady pretzel. This makes it very hard to take a deep, fortifying breath and results in a weak voice. It also gives them a small physical footprint.”

Instead, unfold those arms and legs, and go ahead and talk with your hands, she says. Doing so will not only help you breathe easier, it will help you feel more confident and less anxious

There are plenty of resources available to help rein in the speaking and behavior habits that are sabotaging your efforts to find a place at the power table. Doley extols the value of Toastmasters in helping people become more confident and comfortable speakers. DiResta suggests considering these strategies:

Both DiResta and Rueckert have authored books on the subject of public and work-related speaking.

Knockout Presentations: How to Deliver Your Message with Power, Punch, and Pizzazz by Diresta, and,

Outspoken: Why Women’s Voices Get Silenced and How to Set Them Free, by Ruekert.

DiResta says implementing some of these strategies made a difference for her, .

“Confidence and how to sell myself were always my issues,” she explains. “I learned by reading books, taking classes, hiring coaches and modeling from top speakers. Setting stretch goals and volunteering also helped me to develop my skills and confidence.” 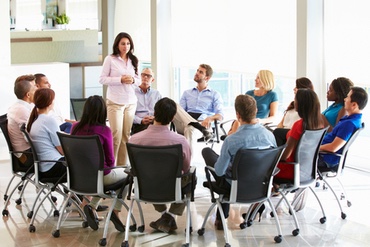 Ensuring that everyone is heard is essential for effective leadership. This is especially critical where women are involved, because according to Rueckert, women are interrupted more frequently than men.

“Including by other women,” she says. “Women Supreme Court justices are interrupted far more often than men, and in studies, women who talk more often than their peers are perceived as less competent than men. As a society we’re still getting used to the idea that women have the right to talk and be heard. We think it’s a done deal, but it’s not.”

What can leaders do to create a culture of inclusiveness where everyone feels comfortable contributing?

Pamela Mills-Senn is a freelance writer based in Long Beach, California.

All Is Not Yet Rosy For Top Black Female Leaders